At the weekend I went to a food market at the beautiful Abbeydale Picture House in Sheffield’s Antiques Quarter, a cinema built in 1920, which is in need of some loving restoration work. I’d never been inside before, so I was quite excited to visit. There were delicious smells coming from the street food trucks and stalls set up in the car park. Then inside, in the slightly fustier smelling building, were local produce and craft stalls, a cafe and of course a bar! 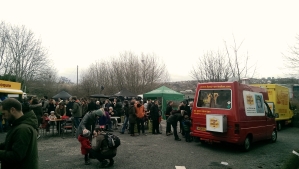 After a little wander and a shop inside we were desperate to get out and get some lunch so headed back to the food trucks. As a veggie I wasn’t struggling, there were loads of veggie and vegan offerings. There were two different kinds of Indian street food on offer, hot dogs and wood fired pizza, where the oven was built into the back of a land rover! For meat eaters there was all that plus a taco truck and a seafood stand. There were plenty of sweet treats and drinks on offer too.

So after a scout around the menus and a nosy at the food people were eating I headed for a converted ice cream van for some Indian food. I chose to have a chickpea curry roti which was delicious but messy! I bought a couple of veggie samosas too, which were made fresh while you waited and cooked to order, all in the back of an ice cream van! My partner had wandered off, I thought, in search for pulled pork, but he came back with a veggie choice so we could share! It was a naan wrap filled with salad and paneer, it was so nice.

Armed with brownies to take home to have with a cuppa later, we left the market full and happy. It was a great event and good to see so many people there.