This weekend was a typically British weekend. The weather had been glorious all week, it came to Saturday morning, I opened my curtains and saw the grey and rainy skies. So the weather was typical, but my plans weren’t. I spent the evening with my husband (still feels a bit weird saying husband, only been married for three weeks!) and our friend, at Peddler Night Market. We were looking forward to a snoop around the newly developed flats and keen to try some different food.

It was an evening of firsts for me. It was the first time I’d ventured up to Park Hill, which was much nicer than my expectations of it were. Also, my first time going to Peddler, I’ve always been busy in the past when it’s been on so it was nice to finally go and check it out, even if it was in a different location to usual. It was up at Park Hill as part of Sheffield Design Week, it was great to see some designers promoting and selling their stuff in one of the shops under the flats, and was great to go up to the “streets in the sky” and have a look around one of the new flats.

So all this was great, but I was there for the food, it was brilliant! At first glance on arrival, it didn’t look like there were too many things to choose from but on closer inspection there was plenty. The food trucks and stalls had been split into two areas, there was a couple of bars and seating areas too, which were covered, though thankfully, the rain had stopped when we arrived!

I decided to have little things then I could try more rather than filling up on one thing! After checking out everything on offer we all headed to Melt Works, a stall selling grilled cheese sandwiches, sure you can imagine they weren’t your run of the mill sandwiches though. The guys opted for sandwiches. I decided to try something I never had, I’d never even heard of them before, chickpea fries. They were billed as a “healthier fry”, gluten free, vegan and infused with rosemary and chilli. They were delicious, especially with the red pepper and garlic aioli to dip them in. They were crisp on the outside and soft in the middle, just what you want from fries, I’m on the hunt to find out how to make them at home!

After our nosey into the flats we were ready to try some more food. They guys decided to try things they never had before, my husband opted for Gumbo and my friend went for dim sum. As a vegetarian I was spoiled for choice, which is great, there was frizza (fried pizza!), pie and dim sum. I headed over to Wallace and Sons for some tofu gyozas. Again, a delicious choice! They came served with some pickled cucumber and mushrooms, spring onion and black sesame seeds, not forgetting the pot of sriracha to dip them in.

The guys managed deserts from Depot Bakery, raspberry cheesecake brownies and chilli chocolate donuts, I decided to have an espresso martini from Tamper. A great way to finish off our time at the market.

Inspired again by street food I’m definitely going to be attempting to make some of the things at home, I’ll also be headed to the market again and telling anyone who’ll listen about how great it was. 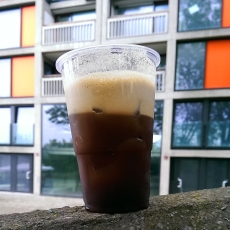