A quick update on my Veganuary. I’m still suffering a bit with this lingering cold, the excitement last week of me having my taste back might have been a bit premature, it wasn’t back as much as I’d thought! So it’s been a week of strong tasting spicy food again.

This week I went out to Marco’s New York Italian for dinner and didn’t struggle. Though there wasn’t the variety of options to choose from that I’m used to, but still, I found something and the penne arrabbiata was good and spicy. It made me realise how far things have come since I became vegetarian, going out for meals used to be one, or if you were lucky, two choices on the menu. Now at the majority of restaurants I’m usually spoiled for choice. Hopefully this will be the case for vegans soon enough. Yes, there are lots of places that do vegan options but sometimes they still feel like an after thought. I mean pasta and tomato sauce isn’t the most exciting thing to go out to eat, it’s a mid week quick tea in our house.

As I’d intended this week, I made some things I’ve never made before. I was craving something sweet and while the house is still full of chocolates that we were bought for Christmas, it’s all milk chocolate so is off limits to me. I subscribe to Jamie Magazine and this month in the back of the magazine was a recipe for energy balls, I had everything I needed to make them so on Monday night I gave the recipe a go. They were so easy to make and are really tasty, perfect for my 3pm lull to go with my coffee! Definitely going to be making them again.

I work from home so lunchtime is usually left overs from the night before or some sort of salad or wrap. I make my own hummus quite often which is perfect on a wrap for lunch. This week though I was out of chickpeas, I decided to concoct and try something new. I made a broad bean version as I had a bag full in the freezer. I cooked them and cooled them then threw them in my blender with mint, parsley, lemon juice, oil, vegan yoghurt and seasoning. It turned out alright for a first attempt. I made lots so it’ll be out over the weekend for lunch or to snack on. 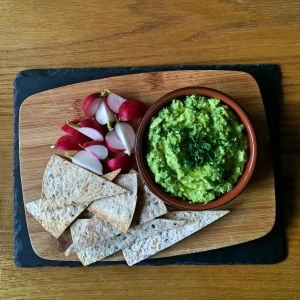 Off to the market in the morning to stock up on fruit and veg, just need to have a flick through some of my cookbooks to look for some recipes to try…