We’ve had a tagine sat in one of our kitchen cupboards since we moved in to our house, 5 years ago! I was so excited when we got given it as a gift one Christmas, that’s the food geek in me, I was keen to give one a try but I’ve never actually braved it. Veganuary is making me try new recipes and so last week I decided to dust off the tagine and brave it! You don’t need a fancy pot to cook it in, any casserole with a lid will do, but it does look kind of fancy and cool if you’ve got one!

I set to looking for a recipe from one of my many cookbooks, I found one I thought sounded good from Leon Ingredients & Recipes, and I also found a recipe for a meat tagine in Jamie Oliver’s book Jamie Does… me being me, I tweaked both and did a bit of a hybrid of the two. Obviously I left the meat out! I often decide to try a recipe and realise I’m a few ingredients short, rather than letting that put me off I tend to see what I can use instead.

To garnish before serving I used a handful of coriander and a handful of flaked almonds, I was going to add some vegan yoghurt but I forgot! I served it with my version of a tabbouleh too, a salad of mostly parsley and bulgur wheat.

Heat the oil over a low heat and slowly fry the onion. When the onion is soft and sweet add the spices and the ginger and garlic, cook for another minute before adding the tomato purée and rest of the vegetables, give them a few minutes and then add the tomatoes, lemon juice, dried fruit and some seasoning. I added a little bit of water too as it was a little thick. At this point I put the pot with the lid on into the oven and left it for half an hour. If you’re cooking it on the hob just pop a lid on. It’s ready when the sweet potatoes are cooked through, just keep testing them, if they aren’t ready leave it a bit longer.

It went down well with my husband and our friend. It was an easy tasty recipe so I’ll make sure the tagine doesn’t just get forgotten about in the back of the cupboard this time, it’ll be out again soon! 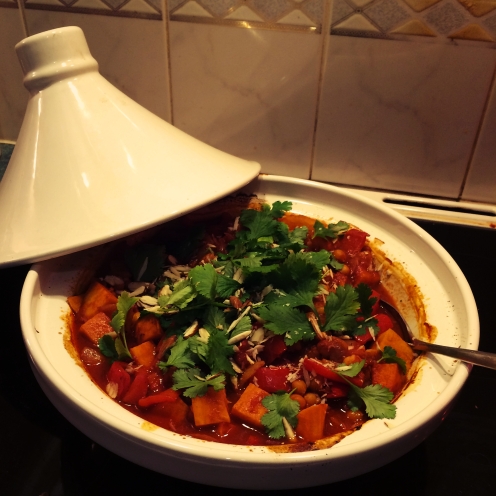