I like a pancake, though I don’t really like the traditional sugar and lemon topping, I’m definitely a savoury pancake lover. I’m a northern girl so I grew up having pancakes with stew, southerners, don’t knock it until you’ve tried it! I’m from Sheffield, so the garnish of choice for my stew and pancakes was naturally Henderson’s Relish, give it a try if you can get your hands on some, it’s delicious and it’s vegetarian, so obviously better than that other sauce with the orange label!

If you read my blog regularly you’ll know I’m cutting down on dairy, so this pancake day it made sense to give a vegan recipe a go, not something I’ve tried before. I searched the internet and found a recipe on PETA’s site, it only needed three ingredients, all of which were in my cupboard so no mad dash to the shop after work needed! Perfect to go with a hearty veggie stew.

With my veggie stew bubbling away on the hob I started to fry the savoury pancakes. The first one was a mess, always is! I started to doubt the batter. After the state of the first one the next few came out fine, nothing to worry about. Topped with a ladle of stew and a few splashes of Hendo’s we tucked in, they were delicious, definitely didn’t miss the dairy here.

After a bit of a break we decided we were ready for the sweet ones! I should add that I don’t make a habit of making two courses on a school night! Anyway, to the banana pancakes, the batter was thicker than the others, like an American style. I popped four small pancakes on to fry while I made a sauce, which turned out to be pretty good actually, it was a brown sugar, dark rum, pineapple and cinnamon concoction. We served the pancakes up with the sauce and some vegan ice cream. The verdict was they were quite good actually, for someone who doesn’t usually like banana or sweet pancakes I’d say it was a success!

All in all a great pancake day dinner! 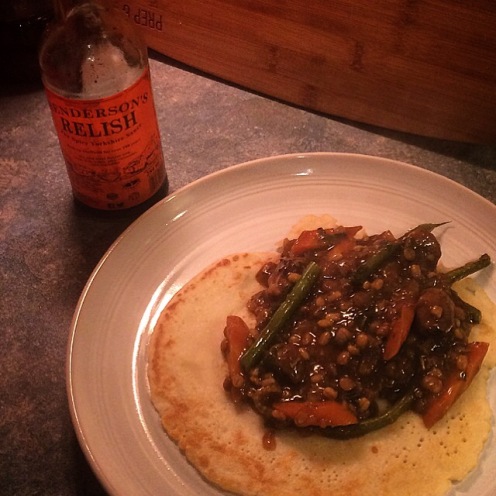 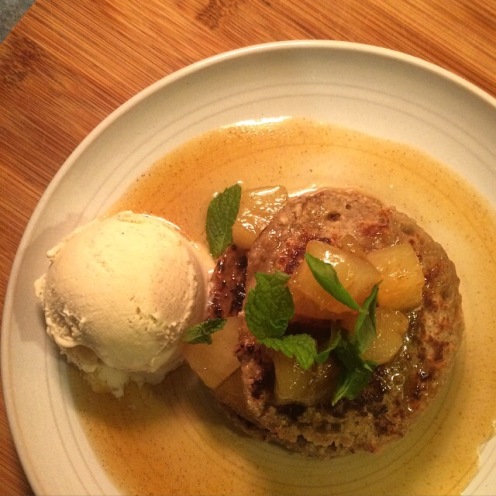